Sermon Recap - In Praise of Interdependenc


Since in America, the month of July starts out with Interdependence Day, I thought that would be a great theme for our whole month - Interdependence! 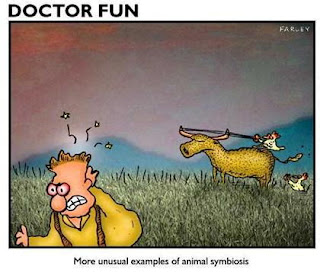 Many of us first learned about interdependence through life science classes in our youth.  I know that this was one of my favorite things about learning, when someone would make the connections for me!

In our sermon, the first example of interdependence I gave was one that has made it most clear to me - and it was an example from my career as a Massage Therapist.  I found, that when treating issues like Plantar Fasciitis, many professionals would attempt to address the pain by working on the foot itself - following a kind of "rub where it hurts" philosophy.  But often these treatments would have limited effectiveness.  I later learned that much of the problem is often actually coming from the tightness or laxity of muscles further up the leg, which determine how arched or flat your feet are, or how tight your plantar fascia is.

for more info, check out http://www.runnersworld.com/tag/plantar-fasciitis

By working on muscle tightness distant to the complaint, and by offering suggestions for exercises that can help correct the arch or movement of the foot, I had a surprising number of clients return pain free!

I think that's wonderful, but this isn't really a talk about massage therapy for common complaints, it's about interdependence.  This example (among many others during that career) showed me how there can be many different factors effecting what we consider "one thing" - in this case, the pain in the bottom of the foot.  And it brought to mind the question - why do we tend to focus on rubbing the foot, before we go looking for the other interdependent factors?

Well, I thought, this kind of localism is quite practical - because it can take time, or advanced knowledge to go searching for the various subtle influences that might be causing an undesirable outcome.  Our instinct is to look at the thing we can see, the obvious thing, and work with that.

This led me to think about a phenomenon that's in the news again - that of Superbugs.  As you may know, these are diseases that come about through the overuse of antibiotics.  For me, I thought it was a great example of why this kind of local thinking is attractive, but can actually get us in big trouble.

A great review can be found in this article: https://www.nytimes.com/2017/02/27/health/who-bacteria-pathogens-antibiotic-resistant-superbugs.html

So, what struck me here was that these bugs get created largely by the way we currently produce meat for consumption.  We utilize large numbers of antibiotics in order to keep animals in conditions that would otherwise make them sick.  And of course, there is also overprescription of antibiotics among humans.  The amazing thing here is that the local solution really seems great - through the wonders of technology, we've now got agents that will kill sicknesses... but, in the long term, this might come around and force us to have to face even stronger illnesses than ever before - which we don't have the antibiotic medications to combat!

So, you can help this problem by going vegetarian, or only buying meat that is raised humanely and without antibiotics.  But another way to help is that you could use interdependence to your benefit, rather than your detriment.  One way to do this is to understand some of the subtle influence that lead to increased immunity in humans.  Two of these are sleep, and proper nutrition.

Did you know that if you get less than 6-8 hours of sleep, you are more susceptible to disease? [more info here: http://www.webmd.com/sleep-disorders/features/immune-system-lack-of-sleep#1]
Similarly, adequate nutrition also keeps our immune system strong - which includes plenty of easily absorbable vitamins and minerals.

So, the question that kept arising for me is this:  Why is it that some people, when faced with pain in the body, will go to their massage therapist to try to find the interconnected causes, and some will go to their doctor for a prescription pain killer?  Why do some of us try to do everything we can to prevent illness, while others don't recognize the impact of their lifestyle on their health?   Don't get me wrong here, there is a place for pain killers, and antibiotics, and for going to your doctor first, but with things like superbugs at play, wouldn't it be prudent to utilize the holistic and preventative health mechanisms first, so we can save the heavy hitting agents for those who really need them? 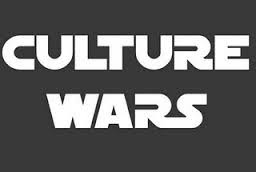 This is why if you ask people what to do about an issue like "crime", for example, some will say, "Lock 'em up, you need stricter laws to teach people a lesson."  But others will say, "You have to look at the underlying causes, poverty is the major predictor of crime, and so if we don't solve the poverty issue in our inner cities, locking people up will not do any good!"

If you got these two people in a room together, they could likely argue for hours without ever reaching an agreement.  It's similar to perhaps the biggest issue facing us today - climate change.  If someone habitually looks at the world as if things aren't connected, it just doesn't make sense that our human actions - how much we drive, how much electricity we use, etc - could have an effect on the climate.  Whereas, if you look at the evidence, we have one of the biggest examples of interdependence staring us right in the face.  We humans have changed one thing - the amount of carbon in the atmosphere - and that has gone on to change many things - all the way from crop harvests in all the world's nations, to home insurance rates in flood-prone areas, to global terror.

Clare Graves, a professor at Union college proposed that humans develop through different levels of ability to problem solve and cope.  His research gives insight into why some people - regardless of the evidence in front of them, would rather pray and hate those outside their group, than take environmental action.  This characterizes someone at the mythic-membership level of consciousness. Other people might be fully established in conventional cause-and-effect materialism, and thus have more resources than someone depending solely upon a mythic understanding of the world, but these individuals will still have a view that is partial, compared with a person who can think in terms of systems and interdependence.

So, we see that we tend to come at our understanding of issues and their solutions based on the culture, or level of development that we are embodying.  This means that if we take any of the issues we've spoken of already, and ask different people, they'll give a response based on their cultural indoctrination.  One response to plantar fascia, or climate change, or superbugs is to pray about it, or just do what the authorities recommend.  Another cultural strategy would be to innovate.  And yet another would be to look for the various influences that are contributing to the problem and address those.

The great news is that this higher, holistic or systems way of thinking does not require throwing out good old fashioned causality and innovation.  But it has the advantage of cutting through our tendency to think in terms of distinct entities with distinct causes.  The reality is more like that every cause has numerous (perhaps infinite) effects, and every effect is coming from numerous (perhaps infinite) causes. 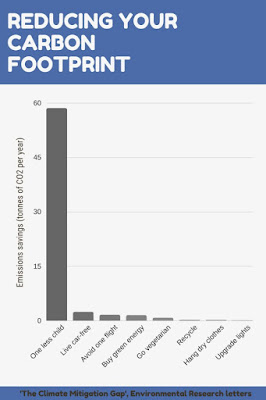 While on the topic of climate change, I was inspired by this recent graphic that I've seen floating around on the internet lately.  And looking at the list, I see that many many people are doing pretty good at lowering our carbon footprint.  But I was surprised at the difference in effectiveness of simply having one fewer child.

This got me thinking, "Wow, if we can just convince people around the world to have fewer children, then that could make such an amazing difference!"  But me, I'm already a Zero Population Growth person, just naturally, for as long as I can remember.  Not everyone is.  So we have to think, what strategies might we use to help people want to have fewer children?

There's the Chinese strategy, we could just mandate the number of children people are allowed to have.  But somehow, this doesn't meet my American sensibilities, and I don't know how we'd ever do it worldwide (since we all agree on so little in the first place!).

Then another thought is, "Well, we could just tell people how important it is to have fewer kids!"  But if you want another child, deep in your heart, then these intellectual arguments often don't change your feelings. Then, there are longstanding cultural norms to deal with... and the fact that if you don't have good education about family planning, there are plenty of accidental pregnancies (just look at Texas).

Then it struck me, that these strategies are very much about attacking the symptom - getting stuck in that disadvantageous localism again.  Could there be a strategy that utilizes the interdependence we've been discussing?

And wouldn't you know, there is.  It turns out that education is inversely correlated with fertility.  In other words, the more educated a population is, the fewer children they have.  Even better than this, if you educate women and girls specifically, you get a more educated population in general.

When women are educated, births go down, but infant mortality and maternal mortality also go down.  So you have healthier childbirth, but you also have fewer children being born.  Education of women seems to have all sorts of downstream effects on the community as a whole, from reduction of domestic violence, to greater participation of women in politics, to greater equality.

It seems that, just like there are keystone species in nature, for our planet human girls and women are a keystone species.  This is one thing you can change that actually changes thousands of other things.  I wonder if perhaps it is because women's brains seem to be wired to more easily grasp the interconnections of things that when you finally give them the right tools, entire cultures change?  (https://www.theguardian.com/science/2013/dec/02/men-women-brains-wired-differently)

In this day and age, with the problems facing us, we don't have the time to focus on old fashioned solutions where one cause makes one effect.  Even our industrial revolution style innovation is no longer enough.  We are in the age of connection, and the solutions we resource must be based in a recognition, and reverence for the interdependent web in which we move.

So my strategy, my call to action to you, if you want to make this world a better place quickly, has this motto:  Just Add Feminism.  Whatever action you want to take for our world, try to couple it with supporting education for girls.  Who knows, the woman who's learning you support might be the thinker who saves us all!