Yesterday I gave a sermon called 'After Enlightenment, the Shadow Work' and we explored the premise that while many many parts of us might be quite mature, even "enlightened" in a way, other parts of us have been repressed and are operating in a kind of shadow-world rather than the light of our awareness.  Freud, Jung, and others explained how this repressed material can then be "projected" onto others, causing us to misperceive our world and suffer from feeling triggered a lot of the time. 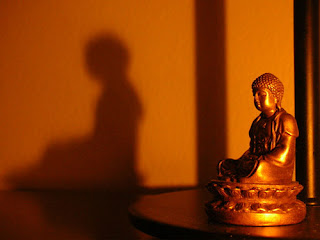 This talk was focused mostly on becoming aware that these disowned aspects of ourselves exist, and using that understanding to help illuminate why we'll sometimes "fall from grace" (as will famous spiritual leaders!).  I briefly mentioned a process by which one can work directly with Shadow material, called the 3, 2, 1 Process, and got some requests for deeper explanation, so I'll give you the short description here for your home practice.  I learned this process through the study of Ken Wilber's Integral Theory and body of practices.

Step one: Find a Trigger
For this work, we'll define "Trigger" as "An emotional response that is out of proportion to the stimulus."  (In work on complex trauma and PTSD, "trigger" can have a different meaning).  We want to find these triggers because they are the signal that we've likely got repressed material in there.  As my friend and mentor, Scott Catamas sometimes says, "The treasure is in the trigger."

A calm or motivated response of dislike toward something isn't the type of trigger we're looking for.  If you feel moved to educate people who don't recycle, well that's healthy, but if you hate them, or find it an outrage, you're probably triggered.  "Hate" is usually too strong, but if there's something that is your pet peeve, or "gets your goat", that's usually a trigger.  You're thrown off balance by it emotionally.

Step two: Feel the Blame!
Ok, to start, we're going to do the opposite of Compassionate Communication.  We need to really get into the feeling of our trigger emotionally to be able to access this -usually subconscious- material.  So, you're not going to make an "I statement" here, you're going to let yourself say what you really think about those people.  What is it about people who don't recycle?  It could be "They're SO inconsiderate!"  or, "They're careless!"  "They're slobs,"  "Immature!"

Notice, we're not calmly observing their actions - that would be good Non-Violent Communication - we're digging into what our actual projections are.  Do we think they're a slob, a narcissist, have no self-control?  What is it about this that is so triggering?

This is the "Three" section of the 3, 2, 1 Process - because it's working with people in the third person.  We're dealing with them, out there.  Contemplate or journal about this step until you really get the solid sense about what it is that triggers you.  Be able to say it in a one sentence format as above "They are ___________."

Step three: Have a Conversation
Now we move from third person to second person.  In your imagination, you're going to sit down and have a talk with this person.  Imagine them in your mind's eye as you tell them directly how they are:  "you're so thoughtless!"  "you're a bully!" "you're a coward!" etc.  Notice any feelings of energetic release or integration that happen somatically as you do this.

Now you begin a process of re-humanization.  Rather than an inhuman "they" you get to project all over, this person gets to talk back.  Imagine that they begin to explain why they act in the way they do.  What their motivations are.  Imagine that they explain it in a way that you really begin to understand what's behind that behavior.  Again, practice in this way until you get an insight, or you feel some emotional release or energetic integration in your body.  You can do this as a contemplation exercise, or if it helps, you can write the narrative out in a journal (or even role-play it with a trusted friend or therapist).

Step four: Re-own the Disowned
This final step is the big one, we move from second person ("you"), to first person ("I").  Now in a state of contemplation, listening to your bodily sensations and emotions, try on the statement: "I'm so _______"  and fill in the word for your projected trigger.  So it might be "I'm so inconsiderate," or "I'm a bully,"  "I'm a coward," "I'm hypersexualized," etc.  Note what sensations, thoughts, or insights come up for you as you try this statement on.

Likely, one of two things will happen.  First, there can be a moment of insight: you say "I'm a bully" and you recognize all the subtle ways you do bully people, but don't notice because that's not how you usually think about yourself.  If this comes up, take some time to be with the insight, let whatever sensations in the body are happening integrate.  Perhaps journal about what you realize and what this brings up for you.

The second thing that might happen is that as you say the phrase "I'm so thoughtless," or whatever it is for you, your mind may respond "NO I'M NOT, I WOULD NEVER!"  This too is a big insight, because it means that you've identified a part of yourself that is not allowed.  The essence of the repressed Shadow is that which is "not ok" for us to be.  We push it down to try to be safe and good.  But the thing is - as you can hear described in the sermon linked above - when we push these things down we lose both the good and the bad.  If you're NEVER allowed to be thoughtless, but you also cannot get your mind to shut up when you go to sleep or meditate, it becomes obvious how these are connected.  You're trying to be a good, conscious person, but you also never get to be thought-free, you always have to be on guard.  Similarly, some people may reject that they are a sensually desirous being, but also suffer from confusion over marital or sexual problems - where sensual desire would be healthy and appropriate.

So if you get the "no I'm not" response, first think about what might be the healthy side of this issue you've projected.  If it's about anger, think about your relationship with healthy aggression, is a healthy form of anger allowed?  If greedy people piss you off, how's your relationship with desire, self-care, abundance?  Are you allowed to desire things for yourself, or was it steeped into you that this is always evil?  Through this process we can come to recognize that what we've repressed as Shadow material is always an expression of an Essential human need - things like autonomy, or nourishment, communion, sexual expression.  We were taught that we must be afraid of and hide the "bad" parts of that need, but in doing so we lost all access to it.  Our own lives become less rich and we're also subject to finding triggers everywhere we go.

One final troubleshooting note:  This last step will only really work if it's a general enough projected quality that you can find a healthy aspect of it.  In the recycling example above, if you thought "They hate the earth", when it comes to saying "I hate the earth" well, that just might not feel true, and I personally can't think of a redeeming benefit to hating the earth.  On the other hand, simple "hatred" is a very scary and oft-repressed emotion, but it does have it's other face - it's an aspect of disgust, often born of powerlessness, and underneath, there's a wellspring of vital energy being hidden by hatred.  Saying "they're so hateful" and trying on "I'm so hateful" could bear many, many insights.  The point is not to become a more hateful person, the point is to recognize and integrate the facets of our human being we're repressed so we can make them conscious.

It's a subtle process, and like all things of the psyche, it's more an art than a science.  With a little practice, though, this type of Shadow Work can unveil aspects of your being that you never even knew were repressed, and also help let some of your loved ones off the hook for the things you're projecting on them!

In this darkest part of the year, what a potent way to bring in a little illumination!
Posted by Rev. Fa Jun at 3:04 PM 1 comment: